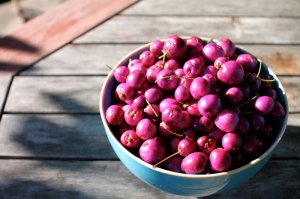 The Lilly Pilly has become a somewhat popular garden ornamental here in Melbourne. A beautiful dense green rainforest tree native to coastal Australia with white flowers that turn into deep pink berries. It was with little surprise that a friend and I spotted a heavy laden tree on the side of the road on an afternoon walk. A convenient plastic bag stuffed in a pocket for just such an occasion made a perfect vessel to carry the fruits home once picked.

We ventured to make Lilly Pilly Jam. I have to say the end result left much to be desired. I think this is mainly because we didn’t have enough pectin and ended up boiling and boiling it to try to get it to set… as a result it ended up tasting more of sugar than anything else. Next time I think adding some apple and more lemon seeds might be a good idea to help it set. And perhaps the laborious task of de-seeding each berry might be worthwhile too.

Washed the liily pilly fruits and removed any stalks etc
Placed them in a saucepan with enough water to just cover the berries (next time I think I would add less water)
Allowed to boil for about half an hour
Strained, and returned the liquid to the saucepan, adding 1 cup sugar for every 1 cup liquid
Added juice of 1 lemon to every 4 cups liquid and tied the seeds up in a cloth and placed in the saucepan
Gently boiled until set when tested on a spoon in the fridge
Transferred into sterilised jars

§ One Response to lilly pilly

You are currently reading lilly pilly at the invisible cookbook.